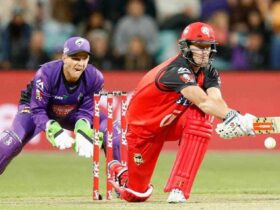 The 46th match of the Big Bash League between Brisbane Heat vs Adelaide Strikers is going to be played at the Gabba ground. And this match will be played on 12 January 2022 at 1:45 pm. And this match is very important for Brisbane Heat and Adelaide Strikers in terms of the points table because both the teams have not performed very well in this tournament.

But if we talk about Brisbane Heat, Brisbane Heat have won three matches in their last 10 matches. And lost 7 matches, that is why today he is sitting in fifth place in the points table with 15 points. And right above them sits the Hobart Hurricanes. That is, Joe is at number four. So if Brisbane Heat is to go ahead in this tournament, they have to win all their upcoming matches.

If we talk about the ground of Gawa, then the ground of Gabba has remained the field of batsmen only and only today. And due to this, the bowlers are not able to perform very well in the Gabba ground. That’s why we can say that whichever team wins the toss and bowls first will win the match.