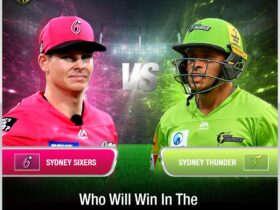 Match Prediction: Who will win the 50th BBL match between Sydney Sixers vs Sydney Thunder.

The schedule of IPL 2022 has been released by the BCCI, the dates for 70 league matches and 4 playoff matches to be played under it have also been fixed. We will give you complete information about IPL 2022 Tournament Schedule in today’s article.

These 74 matches will be played in total and Tata IPL 2022 is to start from 26 March. And on March 26, the tournament will start with the match of Chennai Super Kings vs Kolkata Knight Riders.

This blockbuster match is to be played at the Wankhede Stadium, which is located in Mumbai. After this, the first match of IPL in which two matches will be played in one day, that match will be played on March 27.

26th of March is the day

All this information has been given by Jay Shah, who is the secretary of BCCI. Apart from this, he also told that soon the tournament of IPL 2022 will be started.