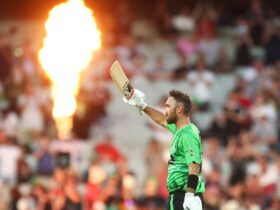 Harmanpreet Kaur, who is also the captain of the T20 format of the Indian women’s cricket team, has won the Women’s Big Bash lead by 6 wickets in the ongoing Women’s Big Bash match at Renegades, Melbourne. Where he scored a brilliant score of 73 runs in 46 balls and remained not out till the end.

Harmanpreet also scored 42 runs in 32 balls in front of Sydney Sixers and he played this match in Renegades.

The official Twitter handle of Women’s Big Bash League, tweeting on top of this, praised Harmanpreet’s score very much and also attached the video in which she scored 73 runs.

Apart from this, other players of the Indian cricket team such as Deepti Sharma and Smriti Mandhana have made their debut for Sydney Thunder and have performed brilliantly, where they defeated Hobart Hurricanes by a margin of 37 runs.

Deepti Sharma also took 3 wickets for 20 runs in 15 balls and Smriti Mandhana is also seen in her excellent form, and she scored 50 runs. But in this tournament so far Deepti Sharma ji has done very well, and she has taken no wickets in her last six matches. Sydney Thunder have lost five out of their last 6 matches.

But if we talk about the Women’s Big Best League only, then in Renegades, they have won five consecutive matches out of their last 7 matches and they have defeated the champion Sydney Thunder very badly.

And the way Harmanpreet Kaur has achieved a score of 73 runs in 46 balls with her brilliant batting performance’, according to that we can see a lot of star players coming to the heights in the Indian women’s cricket team.