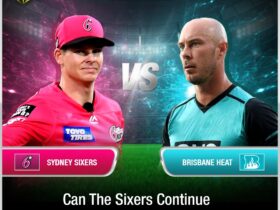 Match Prediction: Who will win the 34th match of BBL between Brisbane Heat vs Sydney Sixers.

IPL T20 2021 has given a chance to many new youngsters this time, and the new youngsters have a very good chance for next year’s IPL auction. The new player has a great chance to please the selectors and this is the last chance.

At present, everyone’s attention is on the current season of IPL, but so that we are seeing that the franchise team is warming up before the match starts because next year’s big auction will have very good unsold players. There may be work to get money.

IPL 2022 can be a huge event in terms of auction. Most of the teams have full faith in the auction of their members, the franchise team is allowed to keep only 2 new players, but at that time the view of the players’ auction will be worth watching.

That’s why IPL T20 2021 is the very last chance for the new youngsters to impress their bosses. As expected, Sanju Samson, who is a player of Rajasthan Royals, is in his monster mode, while Rituraj Gaikwad is also showing his power in Chennai Super Kings. Harshal Patel is also looking very ahead in the list of wicket takers. Along with this, players like Arshdeep Singh and Ravi Bishnoi are also continuously improving their game.

Sanjay Manjrekar, a former player of the Indian cricket team, named a 26-year-old all-rounder to attract attention to all the IPL franchises. The all-rounder is none other than Venkatesh Iyer, currently known as Kolkata Knight Riders. playing on behalf of.

Sanjay Manjrekar said that Venkatesh Iyer is performing very well at the moment and has caught the attention of all the franchises. Looking at his current form, it can be guessed that there is going to be huge bidding between the IPL franchise teams. All the Maliks together will make a very good bid to buy this player and according to me, it can be bid from 12 to 14 crores.

Sanjay Manjrekar said, “I am thinking of 12 to 14 crores, because it is not a temporary game, and Venkatesh Iyer has done very well in this, and his first-class numbers keep going up. Huh. He has set a record for this. He scores run at a strike rate of 92 runs at an average of 47 runs. This is his domestic T20 record. It is not even counted in IPL; his strike rate is very high. His average is 47 runs, so wow is a person who knows how to bat well. And at the same time, he is also a great batsman and also bowler. In the last match, Venkatesh Iyer told what he can do. And how many difficult overs he bowled. That’s why whoever will be his buyer will invest a huge amount for Venkatesh Iyer.”