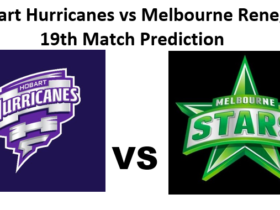 Match Prediction: Who will win the BBL 19th match between Hurricanes vs Melbourne Stars.

Kane Williamson, showing his power and displaying his ability, scored 85 runs in 48 balls in the final match of the ICC T20 World Cup 2020, and the players of the Australia cricket team were also stunned to see this. The way Kane Williamson was batting, Australia Cricket 3 felt that this final match would go out of his hands.

Kane Williamson, who is the captain of the New Zealand cricket team, the kind of performance he showed on Sunday was very much appreciated.

Thanks to Kane Williamson’s brilliant runs, the New Zealand cricket team posted a score of 172 for 4, which is a big score to be scored during the final, and such poor bowling performance is expected from the Australia cricket team was not.

The match played at the Dubai International Stadium was very exciting. Seeing Kane Williamson playing, the experts and former players also started speculating that the title of this World Cup will be a very tough match today.

Wasim Jaffer took to Twitter to narrate his words and he said that Kane Williamson never hurts you with his power, when he starts playing well it seems that thousands of injuries on the front team’s body It’s being delivered, and that’s exactly what it sounds like. Seeing such a brilliant player playing today’s World Cup final match has also become hilarious. Playing such a brilliant way of a player takes cricket to greater heights.

On this, Harsha Bhogle also said that what a great performance, and the way Kane Williamson has changed his playing methods in this match, and has created a boost in himself, it is very commendable. What a wonderful innings, where Kane Williamson scored 18 runs in 19 balls, today he has scored 51 runs in 20 balls.

Kane Williamson, who is also the captain of the New Zealand cricket team, scored a brilliant 85 runs in 48 balls last Sunday, for which he also hit 10 fours and 3 big sixes. And through this, he had also won praise from the entire cricketing world.