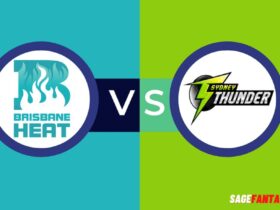 At present, the Sydney Sixers is a team that is situated in an important and very good position. And they have kept flags in the point table. The Sydney Sixers have won three out of their last four matches, and the entire team believes in Jose Philippe for his impressive victory because he has contributed to taking this team to this point. And Sydney Sixers had competed with Melbourne Stars in their previous match and were successful in chasing it with a brilliant 178 runs and achieved his third victory in the tournament.

Adelaide Strikers, on the other hand, have had a very poor start to this tournament, and so far their performance has been very poor. They have won only one match out of their last four matches. They have lost all the other matches because I am missing my main players Alex Carey and Travis Head who are working on national duty at the moment. With this, there is no such player in his middle order that can score good runs and can score big runs.

The pitch of the Sydney Cricket Ground is seen in the favor of the bowlers. Where bowlers will get to see a bounce, and runs are scored on this ground. And chasing fewer runs becomes difficult. That is why this pitch will be in favor of bowlers instead of batsmen.

According to our today’s calculated analysis, today’s match is seen winning Sydney Sixers because behind this their past performance is also included, where they have defeated the teams running against them in a very spectacular way. That’s why today we predict that in today’s match where Sydney Sixers and Adelaide Strikers will clash, Sydney Sixers will win this match.

Chances of both the teams winning the match

If we calculate the probability that both teams will win the match, we find that the Sydney Sixers have a 59% chance of winning and the Adelaide Strikers 41%.