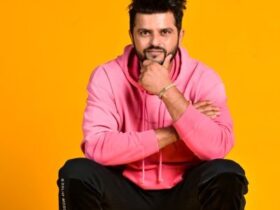 Lord Shardul Thakur, a brilliant all-rounder player of the India cricket team and Chennai Super Kings, has got engaged to his girlfriend Mithali Parulkar very secretly.

Shardul Thakur’s relationship with Mithali Parulkar was going on for a very long time, after getting engaged, Shardul Thakur posted pictures of his engagement on his Instagram account and in the caption, Shardul Thakur wrote that “Today is the beginning of our forever.”

The Indian cricket team’s T20 format captain Rohit Sharma also attended this wedding. This engagement was done under the supervision of the Mumbai Cricket Association.

Shardul Thakur, 30, got engaged in the domestic circuit in Mumbai.

Indian cricket team player and prolific batsman Kumar Lokesh Rahul commented on the engagement photo of Shardul Thakur that “Lord of the Congregation”.

He was playing for the Indian cricket team, and he performed brilliantly in the Chennai Super Kings when the fans called Schedule Thakur Lord Shardul Thakur.

Mithali Chahal, who is the sister of the Indian cricket team’s prolific bowler Deepak Chahar, also shared her engagement pictures from her Instagram account.

And Shardul Thakur was part of India’s Test match with England where India held a 2-1 lead against England. But before the fifth Test match, they have banned that match citing the reasons for Covid-19. That is, the match was canceled for an indefinite time.

Lord Shardul Thakur made his Test debut on 12 October 2018 against West Indies, and on 31 August 2017 he made his ODI debut against Sri Lanka, and on 21 February 2018 he made his debut in his T20I match against South Africa. The number of his t-shirt is 54.

Shardul Thakur has played 4 test matches so far in which he has scored 190 runs and has taken 14 wickets.

There are many superstars from Bollywood who has wished Shardul Thakur for his engagement with his girlfriend Mitali Chahar. Mitali and Shardul were dating for many years but now they have formed a bond for their relationship.