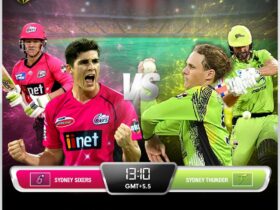 Fantasy Cricket: Who will win the Dream11 Prediction between Sydney Sixers vs Sydney Thunder.

India said that they and the England Cricket Board should think of rescheduling this fifth Test match together.

The Indian cricket team had made its full preparations for this fifth test match, but due to the pretext of the England cricket team, all the hard work was in vain. Both the England Cricket Board and the Indian Cricket Board are trying to solve this problem together. But one thing is certain that in the meantime the England Cricket Board will get a certain time to handle its team. Even if the fifth Test match was lost, it would be the worst year in the cricket history of England where they lost to two consecutive teams at once, in just one year.

England has canceled the play of the fifth test match due to the member of the Indian cricket team’s supporting staff being found to be COVID-19  positive.

After the Indian cricket team got its staff corona positive, a test checkup of its players was also done. After which all the players were found to be coronavirus negative.

On Thursday it was felt that the match would be played as it should be. On Thursday, no protest of any kind was seen from the England Cricket Board that the staff members of the Indian cricket team have been suffering from coronavirus. The England cricket team made an excuse that India would not be able to field its team due to the increasing number of Corona.

India is currently leading by a margin of2-1 in this test series and in the last fourth test match which was played at The Oval, India won by a great margin of 157 runs.

There is speculation that England is scared of Indian cricket players. And as everyone knows and this news and news has come many times that the condition of the England team is very bad. Where their fast bowler James Anderson is injured, and he does not have any best bowler. Due to this, Team England is trying and making excuses to avoid this match. Some people believe that if the England Cricket Board does this, then it will have a very bad and negative effect on future games.

A few days ago, during the fourth test match, the chief head coach Ravi Shastri, bowling coach Bharat Arun and fielding coach Ramakrishnan Sridhar, were infected with the coronavirus among the staff members of the Indian cricket team, those who were immediately isolated. His rt-PCR test is being done and he is not even allowed to go out and go out. India cricket team checked up its players where all the players have been found to be corona negative. Even after this, the cancellation of such matches of the England cricket team shows their fear.