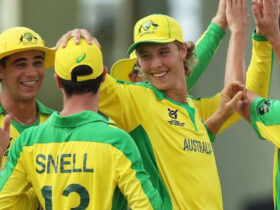 Australia said that we look at the game with respect. All players are equal to each other. No one is bigger or smaller than anyone. Everyone is given all kinds of rights and no one is discriminated against on the basis of gender. If the new Taliban government does not support the women’s cricket team, then the Afghanistan men’s cricket team will also not play on Australian soil.

Australia said that it is necessary to see the women’s cricket team with respect all over the world. Cricket is a game which can be played by any gender. It is played by personality and not any gender specific.

The last time the Taliban took control of Afghanistan, the Taliban banned the education of girls.

Right now, in the context of what is happening in Afghanistan under the Taliban, human rights issues are going on in full swing there. Because it is heard that human rights are being crushed under the rule of the Taliban government.

But he would also like that Roya Samim also plays against the Australia Women’s cricket team and performs well.

With this, Australia’s Sports Minister, whose name is Richard Callback, has requested the International Cricket Council’s intervention on this issue.

He urged that he urges the International Sports Authority to kindly fulfill the responsibilities of his International Cricket Council and stop the steps going to play them by standing in support of the Afghanistan Women’s Cricket Team.