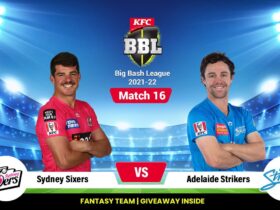 Match Prediction: Who will the 16th match of BBL between Sydney Sixers vs Adelaide Strikers.

Earlier, the way Bangladesh had lost to Scotland, all hopes of winning Bangladesh were looking dim. Shakib Al Hasan was the hero of Bangladesh’s victory, who scored 42 runs and with this, he also took 3 wickets.

Bangladesh beat Oman by 26 runs in the opening leg of their Group B Chasing 154 for victory, Oman could only manage 127 for 9 and Jatinder Singh Singh scored the highest 40 for Oman and Mustafizur of Bangladesh. Rahman took the most wickets in which he took 4 wickets in his name.

If the match is seen from the beginning and the light goes, then Bangladesh opener batsman Mohammad Naeem played an innings of 64 runs and for this, he used 50 balls and scored 64 runs with the help of three fours and 4 sixes.

After this Liton Das scored 7 runs in just 6 balls and Mahedi Hasan could not score a single run. Shakib Al Hasan then made 42 off 29 balls, hitting 6 fours, followed by Mahmudullah, who scored 17 off 10 balls, for which he used 1 six and a four. did.

Now if we talk about Bangladesh bowlers, the highest wicket-taker among Bangladeshi bowlers was Mustafizur Rahman, who took 4 for 36, followed by Shakib Al Hasan with 3 for 28 and Mohammad Saifuddin and Mehndi Hassan took one wicket each.

Bangladesh celebrated their total score of 153 runs where they lost 10 wickets.

After this Zeeshan Maqsood who is the captain scored 12 runs in 16 balls, Ayan Khan scored 9 runs in 13 balls, Sandeep God scored 4 runs in 8 balls, Naseem Khushi scored 4 runs in 6 balls, Kalimullah scored 5 runs. Scored 5 runs in balls, Mohammad Nadeem scored 14 runs in 12 balls, similarly, all the players contributed a little bit from their side.

But still, he could not get the 154 runs and the entire team was reduced to 127 runs by losing 9 wickets.

After today’s match, Bangladesh players must have had some confidence and they must be feeling a little positive because this match had become a do-or-die match for them and they won this match.