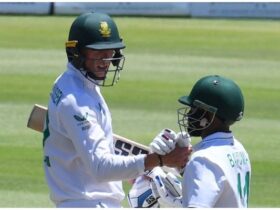 In the India vs Australia T20 World Cup warm-up match, India defeated Australia by 8 wickets and India achieved the target of 153 runs with 13 balls to spare.

The most important thing in this match was that Rohit Sharma made his half-century for which he used 41 balls.

Australia elected to bat first after winning the toss and here Australia performed well in the batting, in which Steve Smith also played an innings of 57 balls, scoring his fifty in 48 balls.

In this match, Australia’s swashbuckling batsman David Warner scored 1 run in 7 balls, and Aaron Finch scored 8 runs in 10 balls. After this Mitchell Marsh did not score any runs and Steve Smith played an innings of 57 runs in 48 balls, he hit 7 fours.

In this way, they achieved a score of 152 runs for the loss of 5 wickets and on the other hand, the Australian bowlers failed to do any kind of good performance, Ashton Agar took one wicket and apart from this no player also took any wicket.

Now if we talk about the Indian cricket team, then only Lokesh Rahul, Rohit Sharma, Suryakumar Yadav, and Hardik Pandya came to bat in the form of batting in the Indian cricket team. Because Rohit Sharma retired out and in the rest of the batsmen, Lokesh Rahul was dismissed on the catch of David Warner, and Suryakumar Yadav and Hardik Pandya were not out.

Along with this, Lokesh Rahul achieved a score of 39 runs in 31 balls, for which he hit 3 sixes and two fours, and after this Rohit Sharma, batting brilliantly, scored 60 runs in 41 balls and for this, he hit 3 big sixes and three big sixes. He hit 5 fours; along with this he also got his half-century.

After this Suryakumar Yadav played an innings of 27 runs for which he hit six and 5 fours and in the end, Hardik Pandya came to play who scored 14 runs in 8 balls, and for this, he hit a six.

Thus the Indian cricket team achieved a score of 153 runs with 13 balls remaining. Now if we talk about the bowlers of the Indian cricket team, then almost all the bowlers contributed to this, Bhuvneshwar Kumar got one wicket for 27 runs, Ravichandran Ashwin gave 8 runs for taking 2 wickets, besides Ravindra Jadeja 35 Took one wicket for one run. And Rahul Chahar took 1 wicket for 17 runs. In this, the best bowling was seen by Ravichandran Ashwin, who mainly took 2 wickets at an average of 4 runs, that is, he took two wickets for 8 runs.

Thus India restricted the Australian cricket team to the score of 152 runs.