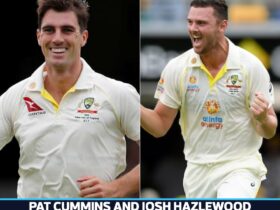 Today is November 11, and today is the second match of the semi-final of the ICC T20 World Cup 2021. And this is the 44th match of the entire tournament. Today Australia and Pakistan cricket team will clash with each other.

But now the circumstances have changed, because Pakistan’s team is seen in very form this time. And the reason for this is that he has worked very hard in the last 10 years.

This time there will be many such players who will clash with each other. Like Shaheen Afridi and David Warner will clash. Adam Zampa and Faker Zaman will also clash, and Josh Hazlewood and Babar Azam will compete with each other. We will get to see many new aspects in the second match of the semi-final between this Pakistan vs Australia cricket team.

According to the way Australia cricket team has played its last match, David Warner is seen in a lot of form at the moment. David Warner’s form is known from the fact that he scored a century in his last match.

In this entire tournament, David Warner has won the Player of the Match title more than 2 times so far.

This time the battle of power play is also going to be very cruel, and the reason for this is that David Warner, Babar Azam, Fakar Zaman, and Shahid Afridi are there. All the players will play their part as the main players of the power play. In both the teams, the players who will play such a role that they will try to make the opposite team face a very bad defeat.

Pakistan cricket team is looking in very good form at the moment. And the reason for this is also that his batting order and bowling border are kept at very good points, which is also very important for his success.

Shaheen Afridi is looking in very good form at this time which will be very beneficial for Pakistan cricket team.

It will be a knockout game for both the teams i.e. if either team loses it will go straight home. No match will be played for him again. And for this, the Australia cricket team will put all their hard work to win this match along with their players.